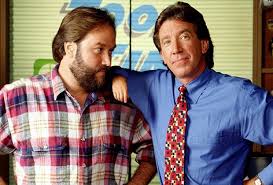 Get ready for some more Tool Time! Tim Allen and Richard Karn played Tim Taylor and Al Borland, respectively, on the hit ’90s sitcom Home Improvement. Now the two funnymen are teaming back up for a new competition series, currently titled Assembly Required. The show has been greenlit by History for 10 episodes.

Allen will star and executive produce the show while Karn will host and also executive produce alongside his former co-star. The show will “spotlight the brightest builders from across the country,” as they “breathe new life into everyday household items in desperate need of fixing.” The show will challenge the contestants to not just rebuild but to “build it better.”

Allen and Karn will look into the history of the items being fixed in each episode.

“Let’s face it — we’re living in a throwaway society,” Allen said in a statement. “We buy, break, replace… rinse and repeat. Whatever happened to repair and rebuild? There are some people who unfriend, unfollow and dispose of anything that offends, annoys or breaks – so I’ve created a show to remind people of the satisfaction and pride that comes from rebuilding something on their own.”

Allen is also excited about reuniting with Karn, adding, “And who better to join me than my buddy from the old Tool Time days – Richard Karn! Now we’re talking More Power!”

Assembly Required is set to premiere in 2021 on History.

This video is unavailable because we were unable to load a message from our sponsors.

If you are using ad-blocking software, please disable it and reload the page.

Is Now A Good Time To Sell A Home?