The 10 Best Projectors For Movies, Gaming And Live Sport 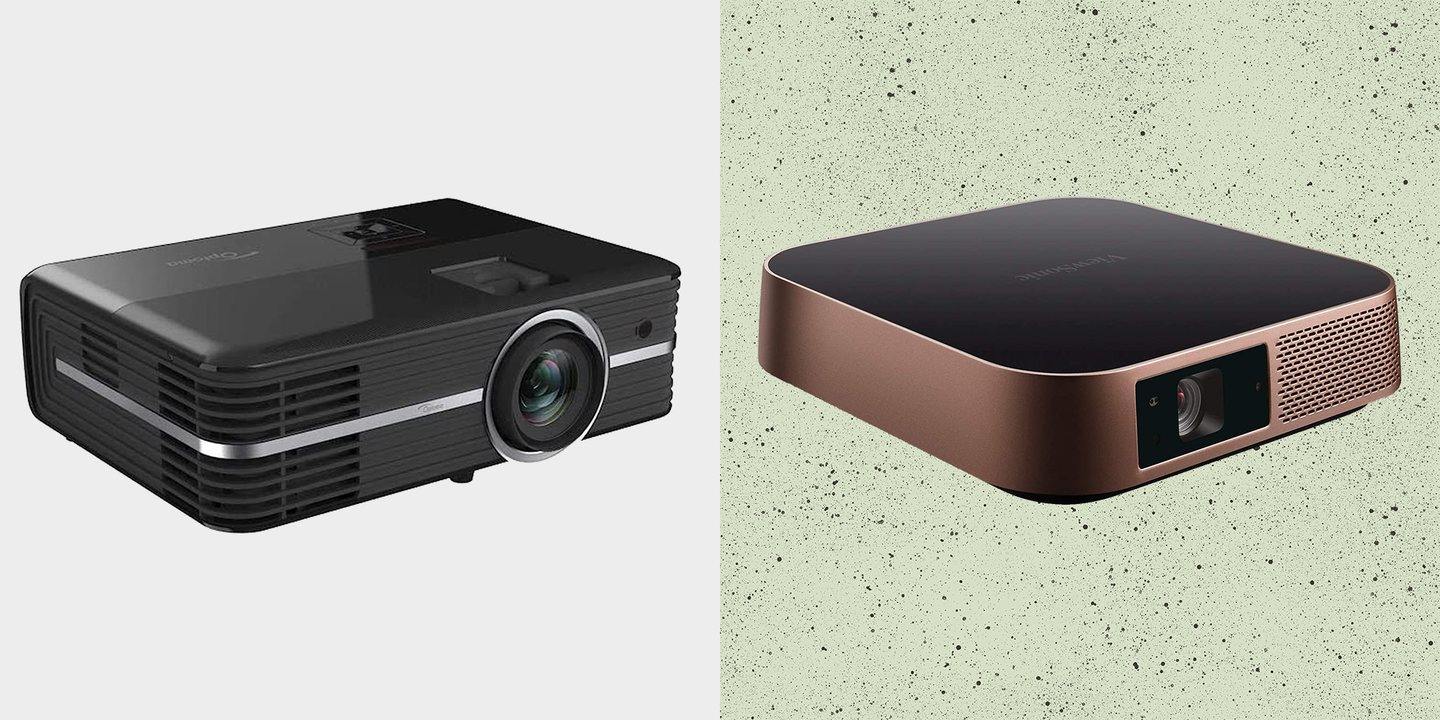 As the slip-slip-slipping of blockbuster release dates makes clear, people aren’t eager to return to the cinema just yet. Live sport, meanwhile, remains firmly spectator-free, and with pubs still a weird, perspex-covered place where the atmosphere is flatter than a pint of Wetherspoon’s Fosters, your sofa remains the best place to enjoy the football, cricket or marble racing. That is, if you invest in the right kit.

No, we’re not talking about a industrial-sized popcorn machine, or a carpet covered in spilled Coke. You just need to invest in one of the best projectors on the market.

Fortunately, it can be a rather small investment. Projector tech has come on a long way in the last decade and – depending on how decent your curtains are and how partial you are to white walls – you can now get a cinema-like experience in your living room without an MTV Cribs-level outlay. Of course, you can still stump up five figures on an Odeon-level laser projector, but there are also excellent HD and 4K options for less than the price of a TV.

What you need to know

If this is your first foray into the world of home cinema, there are a few things to keep in mind before you decide on the best projector for you. The first, and most important, is resolution. Like TVs, you can get everything from cheaper HD-ready 720p projectors to cutting-edge HDR displays, which offer crystal clear images and deep blacks, even when projecting over hundreds of inches. Cinephiles will want as many pixels as possible, but if you’re just after something for family movie night, then you don’t need to stump up for 4K.

The second big factor for picture quality is the image’s contrast ratio, which is a way of measuring how well it reproduces blacks and whites (basically, how much light is reflected from a pure black and pure white surface). The bigger the ratio, the better the performance – at 500,000:1, blacks will be inky and colours will pop; at 2,000:1, the image will look murky and colours will bleed into each other.

You’ll also need to check the brightness of the projector, which is measured in lumens (the more lumens, the brighter the image). Lots of lumens doesn’t necessarily translate to better quality – super-bright images can often mean blown-out colours – it’s more about the environment you’ll be watching in. If you want mates round to watch the 1pm kick-off, then you’ll need something that can overcome a lot of ambient light. If you’ve kitted your basement out as a home cinema, pick picture quality over brightness.

Unlike a TV, projectors themselves don’t have a huge footprint. But what does matter is your intended screen size, and how far away from it you intend to position your projector. This is known as the throw distance. Most good home projectors work best when two or three metres away from the surface they’re projecting on, but if you’re pushed for space, look for a ‘short-throw’ projector, which comes equipped with clever lenses that give you a full, cinematic image even when just a few inches away from the wall.

Finally, you need to think about connections and portability. Do you need to run speakers out of it, or plug in everything from your computer to Fire TV sticks to gaming consoles? Are you going to mount it on the ceiling and leave it there forever, or do you want something you can take into the garden, or round to friends’ houses, for film nights on the go?

To help you choose, we’ve broken the best projectors on the market down into three categories: the best for a cinema-like experience, gaming, and for watching sport. Just add popcorn.

Projectors made for watching films are all about image quality. Since you’re not a French duke, we’ll assume you’re not lying around gorging on cinema during the day, but instead are after something for film night, which means prioritising resolution, colour reproduction and contrast ratio over brightness. These are our three favourites, from big budget blockbuster to punching-above-its-weight indie.

Optoma’s entry-level 4K projector offers an affordable way into true cinema-quality viewing, and while 3D films remains (at best) a mixed bag, its 1080p 3D is impressively smooth thanks to PureMotion tech that eliminates judder and blurring.

Colour reproduction is particularly good – load up one of Nolan’s Batmans to really appreciate how black the blacks get – but with 3,200 lumens of brightness, you don’t need a hermetically sealed room to get the best out of this projector. Granted, you’ll still want the curtains shut if you’re watching TV at noon, but unlike cheap projectors, it does at least work in the daytime.

Setup is super simple, with all the ports you’d expect and enough of them to take all your hardware. At 5.5kg it’s not the lightest projector, but also not so bulky that you’ll struggle to house it (or risk pulling the plaster off if you ceiling-mount it). It doesn’t, however, have a short-throw option (or much in the way of lens shift capabilities) so ideally it will need a dedicated home a couple of metres from the screen.

If the Swiss army decided that its troops needed a projector alongside a knife, a screwdriver, scissors, corkscrew and golf divot repair prongs, this is the one they’d go for. Integration is the word: alongside the usual ways of getting your films up on the wall – HDMI and USB – there’s a Micro SD slot, casting from your phone or tablet, and the option to stream direct from apps including Netflix and iPlayer without connecting a device as well as connectivity with voice assistants. Plus, there’s 10GB of storage space on board.

Light and compact, it’s barely broader than an A4 piece of paper and can throw a pretty vast 80-inch image from as close as two metres from the wall you’re watching on. Images are poppy and intense, and sound crisp if a little lacking on the bottom end. Not that that’d matter too much if you were out on manoeuvres halfway up the Matterhorn, but still.

OK, so you were maybe thinking of a home cinema for less than £200? Gotcha. This little model is a smidge over £100 right now on Amazon but delivers HD imagery on the cheap.

It’s not full HD (will only offer up 720p instead of 1080p), but your films will still look marvellous on the bigger projection.

What makes a good gaming projector? Well, a good refresh rate is good – something over 120Hz – but sadly that information isn’t always readily available. You’ll need a sharp 1080p resolution to bring the most out of the graphics, and a high lumen rating to see them in the first place if you’re playing during the day-time. Check out our top picks below.

Projection: Will work on any white surface (can be placed inches away from the surface projected on).

An outlay, but projector more than justifies its price thanks to the powerful 4K gaming compatibility. Plug your console of choice into the projector with an HDMi cable and unlock a higher level of gaming on a huge (up to 500″) display, if you’ve got a wall big enough.

All gamers know that latency and input lag are issues when playing in 4K, but this projector will reduce that delay between pressing a button and the action taking place on screen to milliseconds.

Some ‘gaming’ projectors are really just rebadged cinema projectors. But BenQ’s TH685 is a console-friendly specialist, courtesy of a mere 8ms lag between the time you press a button and the action appearing on your screen, as well as a frankly blinding 3,500 lumens display that means you could probably play Fortnite outside, at midday, during the summer solstice, and still get a clear image.

That said, it will do movie night proud too, thanks to a sharp 1080p HDR display that offers deep blacks and poppy brights. Granted, it can’t quite hit the cinematic experience of the Optoma above (its 10,000:1 contrast ratio pales in comparison to the Optoma’s 500,000:1) but the opening scene of Star Wars: A New Hope is still appropriately epic on a 300-inch screen.

Projection: Will work on any white surface (can be placed inches away from the surface projected on).

The image quality is important when it comes to gaming, and if a top-end 4K projector seems a little too much for you right now, then this Full HD option might be the better avenue to go down.

Place this projector right up close to the wall and beam out the games you love on a larger-than-life display. FIFA never looked so good (probably won’t stop you getting thrashed by teenagers online, though).

You don’t need to spend big, of course. Just take look at a super-cheap projector, perfectly set up for your gaming needs, from Elephas. This one is less than £100, making it one of the cheapest projectors in this list, and will get the job done with no issues. Obviously there’s a drop in quality compared to more expensive models, but for this price there can be no complaints.

Much like with gaming, you’ll need to shell out for a machine that can handle light well and provide crisp visuals – especially if you’re playing for a high-definition set-top box. That means a high lumen count and, if possible, 4K capabilities. There’s a good chance your front room will become your friends’ go-to destination for sport, too, so make sure the sound is up to scratch.

This is the most expensive projector we have on our list, but it also has some of the best 4K imagery. Rest assured, it’ll make you feel like you’re in the hollow, soulless, eerily silent stadium itself (without a hazmat suited steward spraying you with anti-bac every time you cheer).

The BenQ is a brilliant all-rounder with a focus on live sports broadcasts, with a special contrast-heightening mode that helps you get the most out of the machine’s 3,000 lumens.

That, along with its HDR and 4K capabilities, will help sharpen every detail and provide clarity during daylight hours.

This option from Apeman is surprisingly impressive, especially for the price. Best known for sports cameras, the company has developed a decent 4K projector that is quiet, affordable, and offers high-quality output all-round.

It also has a “low-strobe” feature, which reduces flickering and eases the strain on your eyes when watching high-speed content. Perfect for watching De Bruyne curl one into the top bins from 30 yards/Phil Jones smash his face into the floor for absolutely no reason whatsoever.

Need some positivity right now? Subscribe to Esquire now for a hit of style, fitness, culture and advice from the experts