The home at 7731 Knox Court was previously damaged by a fire in April 2021, the Westminster Fire Department confirmed.

On Tuesday afternoon, a cadaver dog alerted crews to possible human remains inside the home that was leveled by an explosion early Tuesday morning in the 7700 block of Knox Court, according to the Westminster Police Department (WPD).

Lt. Brian Clark with Westminster Fire Department (WFD) said the call came in at about 2:38 a.m. Tuesday for a possible home explosion.

Fire investigators, along with WPD detectives, are looking into the cause of the explosion. That investigation will likely take several weeks.

There were no reports of injuries to any of the neighbors in the area around the home, according to WFD.

There was a reported gas leak in the area Tuesday and Xcel Energy crews were called in to cut gas service to the area, Clark said. All other residents within the neighborhood were allowed to return home and their utilities were restored, according to Westminster Police.

The cause of the explosion remains under investigation, although Xcel said in its statement that initial safety checks at the property and those adjacent to it found “no indications” of issues within their system.

WFD confirmed that the home was also heavily damaged by a previous fire on April 8, 2021. In a statement, Xcel said the home had not had gas or electric service since that same month. 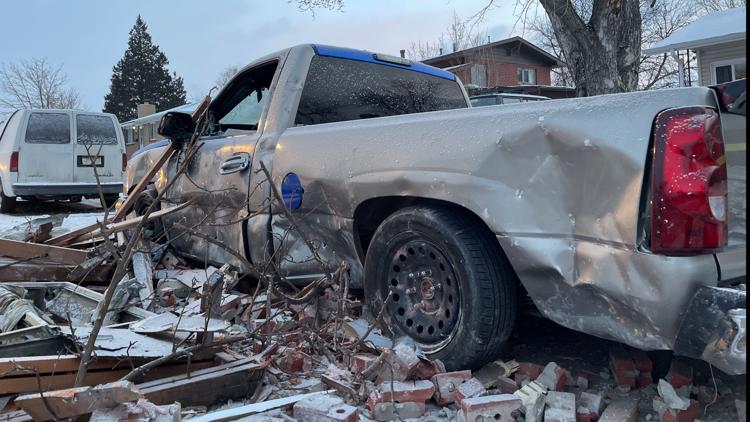 David Brand, who lives across the street from the home, said his neighbor’s home was leveled in the explosion.

“About 2:30 I was just kind of woken up, shaken out of bed, like a big explosion,” said Brand. “And I noticed pictures falling off the wall, plants were knocked over and I originally thought a car had hit my house.”

Brand said he looked outside and could see smoke and steam coming from the home across the street, but said he never saw any flames.

Homes on either side of the explosion also sustained extensive damage.

“My windows were pushed in, not broken but pushed in,” Brand said. “And the wall was warped, the brick wall was pushed in and my garage door is bent a little but it was pretty minor compared to the neighbors.”

Brand said numerous vehicles parked on the street were damaged by flying debris, including bricks that smashed through car windows.

Xcel’s full statement is below:

“Our thoughts are with those impacted by this morning’s incident. Our crews are on the scene and working closely with fire officials and emergency responders to ensure residents in the community are safe. The house has not had gas or electric service since April of last year.  Our emergency responders have completed initial safety checks at this property and at the adjacent homes and found no indications of issues with our system at this time. We are working with fire officials on the investigation into the cause of the incident.”

> Do you have a news tip on this story or any other story? We want to hear from you! Tell us about it by emailing [email protected]

MORE WAYS TO GET 9NEWS

Subscribe to our daily 9NEWSLETTER for top stories from 9NEWS curated daily just for you. Get content and information right now for can’t-miss stories, Next and Broncos content, weather and more delivered right to your inbox.

RELATED: How to customize the stories and alerts you get from 9NEWS

HOW TO ADD THE 9NEWS APP TO YOUR STREAMING DEVICE

ROKU: add the channel from the ROKU store or by searching for KUSA.

For both Apple TV and Fire TV, search for “9NEWS” to find the free app to add to your account. Another option for Fire TV is to have the app delivered directly to your Fire TV through Amazon.

You can watch videos on demand from our top stories, local politics, investigations, Colorado specific features and even classic 9NEWS videos from the 1980s. If you missed a special program, such as a documentary, you will find them in the “9NEWS Original” channel on the app.

> See a typo in one of our stories? Let us know so we can fix it! Email [email protected]