If you want to build your own, I have a set of DIY rising shelf plans and a parts list, including everything I used:

First, I started off by building the main body of the rising shelf. It consists of a piece of plywood with a 2×4 attached to the backside of it. On this 2×4, I attached some hooks. Then, in the four corners, I attached some garage door rollers. These rollers are really versatile and were key in making this project work. 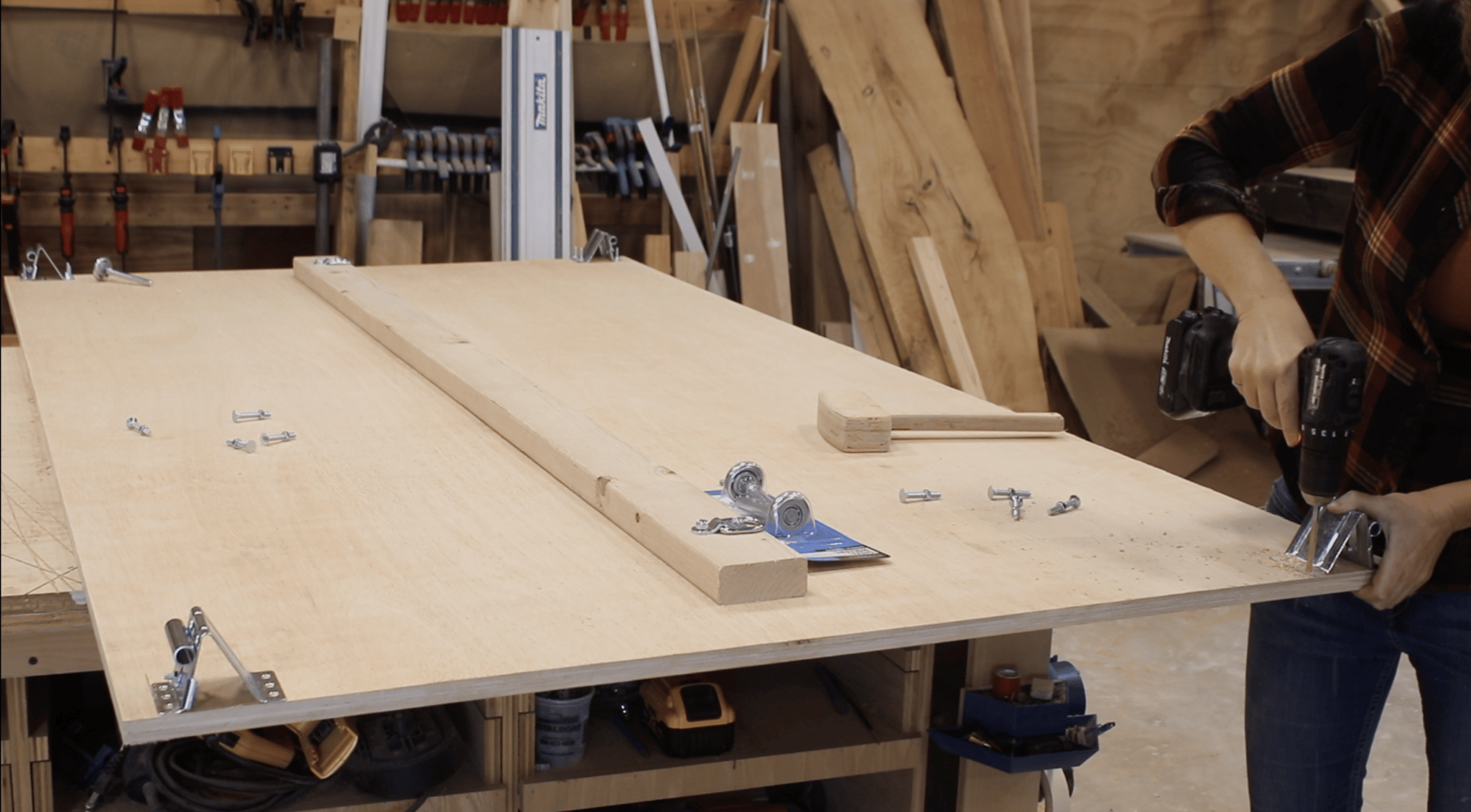 For a track, I actually wanted to buy something off the shelf and ended up looking at garage door tracks. They use to be cheap, but like everything else, have skyrocketed in price. Instead, I decided to build my own tracks from wood. I grabbed the hardest wood I had in my shop that was long enough, which was oak, and arranged it into an L. For the tracks, you definitely want something hard for long-term durability. I attached it to the wall by holding it in place and throwing in a single brad nail. This will hold it just long enough for me to put a level on it and plumb it up. I only had a 4’ level in my shop so I moved to the bottom, then top, and placed a few brads as I straighten it out. Once it looked good, I came back with screws. I pre-drilled the holes to ensure the oak didn’t split. Next, I repeated the process by attaching the right track the same way as the left. 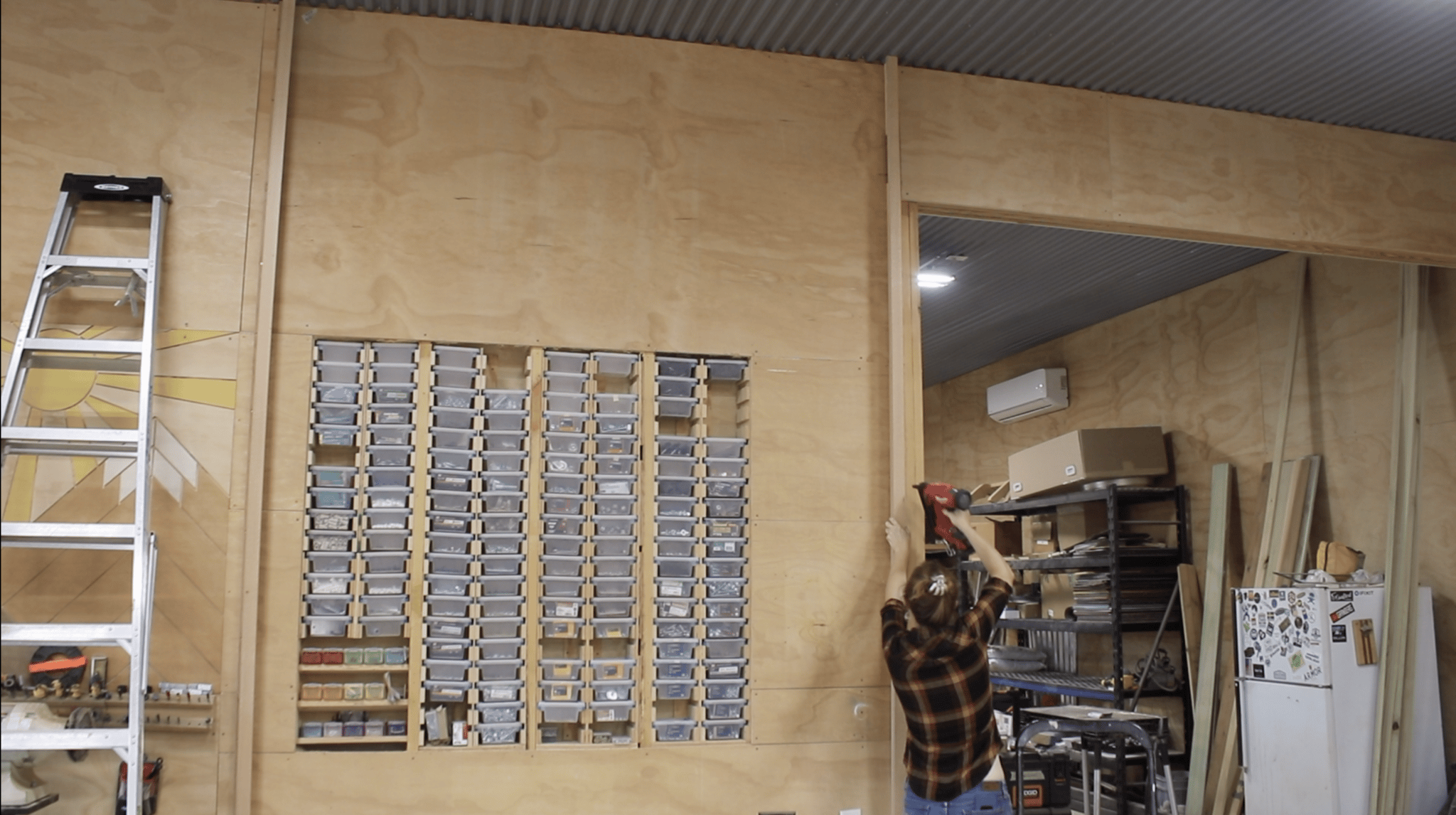 Now that the tracks are attached, I moved to the top and attached some pulleys. These will be what the cable will go up to, before veering right to the hoist. I used some lags to go into my wall here. Then, even though it isn’t needed, I added a ledger board…just to be safe. A lot of the force on these pulleys will be vertical since it’s going to be reaching down and pulling the rising shelf upward. To directly oppose this force, I ran screws up into the ledger board. This is in addition to the lags that went into the wall. 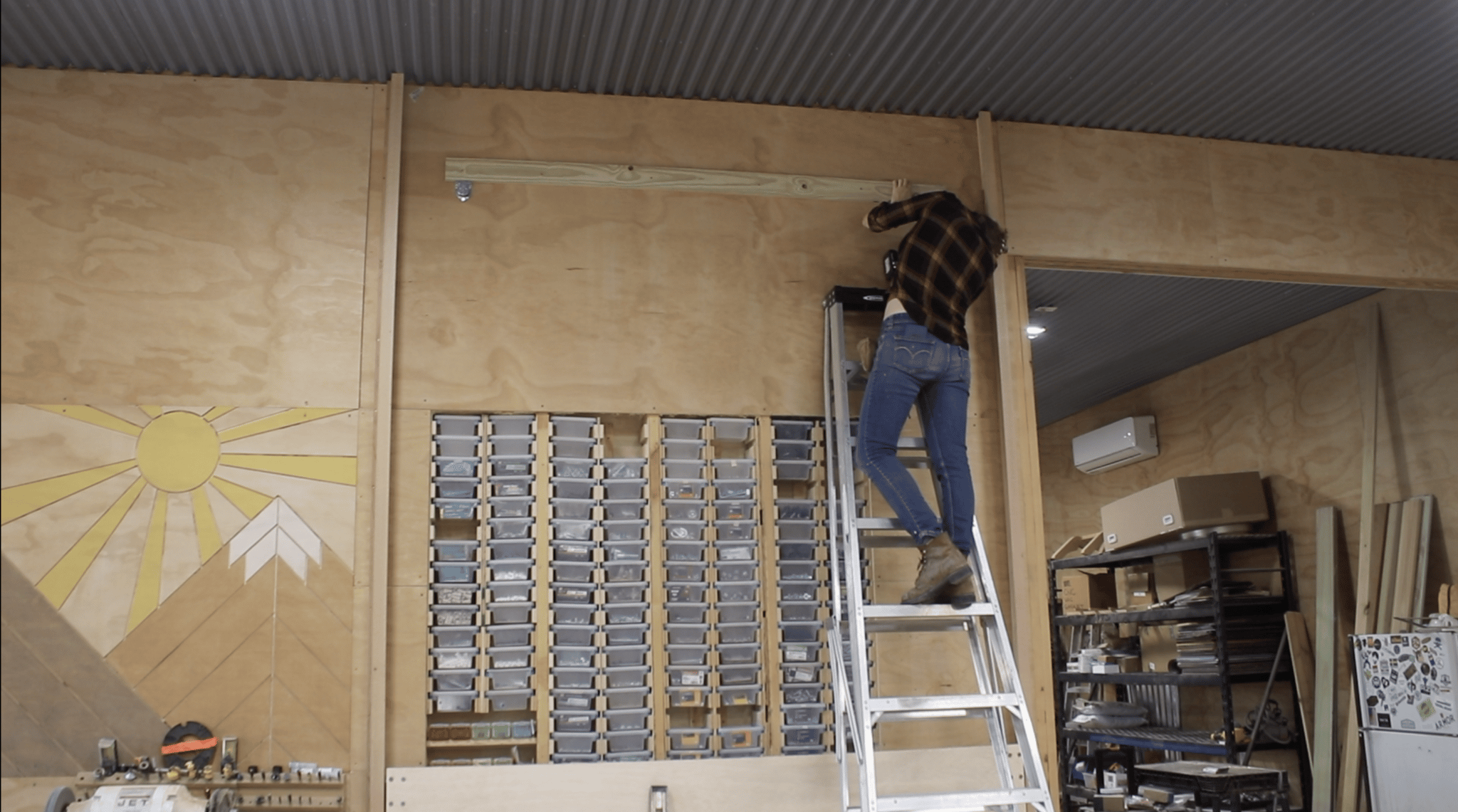 Moving on, the next step is to go back to the shelf and attach a few components. The first is a thimble hooked onto the anchor point on the 2×4. This is used so the wire rope has a track it can be placed in and then it can be looped back onto itself. To secure it, I used what’s called “wired rope clamps”, which are tighten down onto both the lead in and lead out strains. I used DAP’s Tank Bond Thread Locker on all of the project’s hardware that had a nut on it. I applied it to the threads before I added the nuts. It a fast-dry coating that creates a tight seal that absorbs shock and vibrations, preventing fasteners from unintentionally backing out. I really love it because the treated fasteners remain completely adjustable, removable and reusable if I have to replace them in the future. I use it on anything that has vibration. 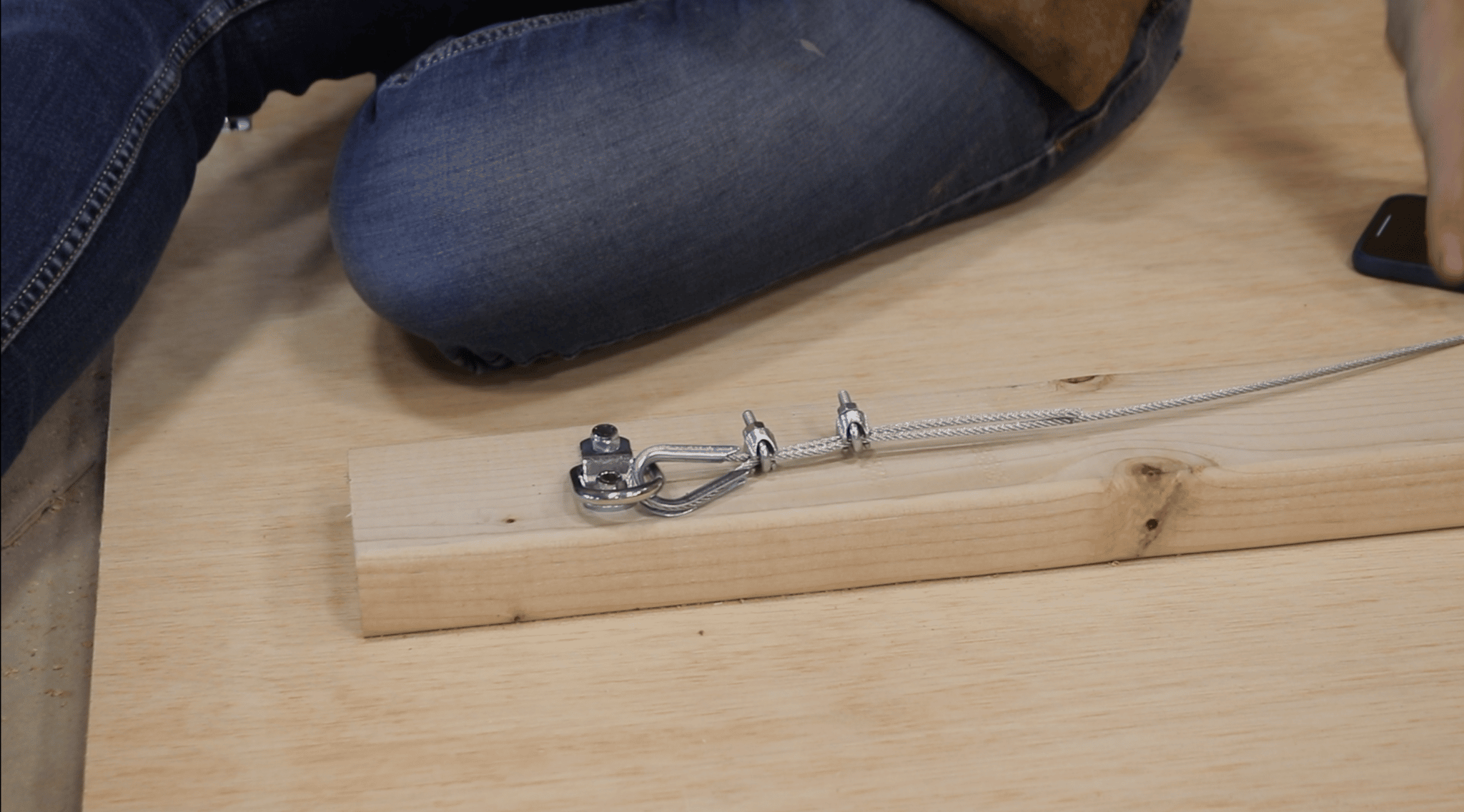 Noooow, we can set the shelf in place. It’s large and awkward so help was needed for this step. Jacob and I brought it in from the bottom, slightly tilting it so the top roller would slip into the track, then straightening it out vertical. 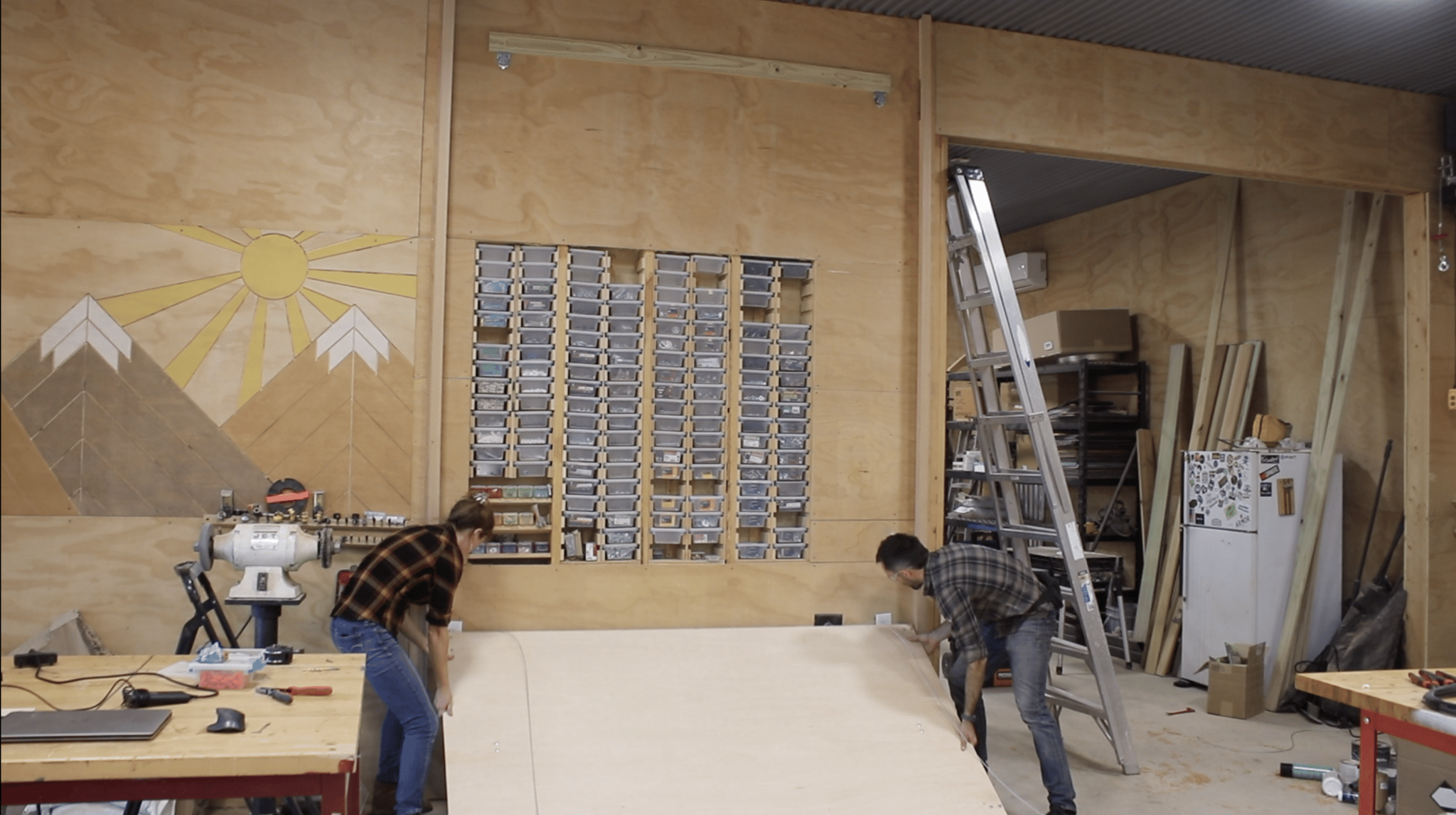 I fed the cable up to the pulleys from both anchors, but now needed to join them into one. What I did here functions the same exact way that a window blind does. In the shelf set-up, the component I used is called a turnbuckle. This allowed me to attach both cables to one side, then shoot one cable from the other. Also, this gave me the ability to make small, micro-adjustments later on once everything was installed and it was time to do final tuning. 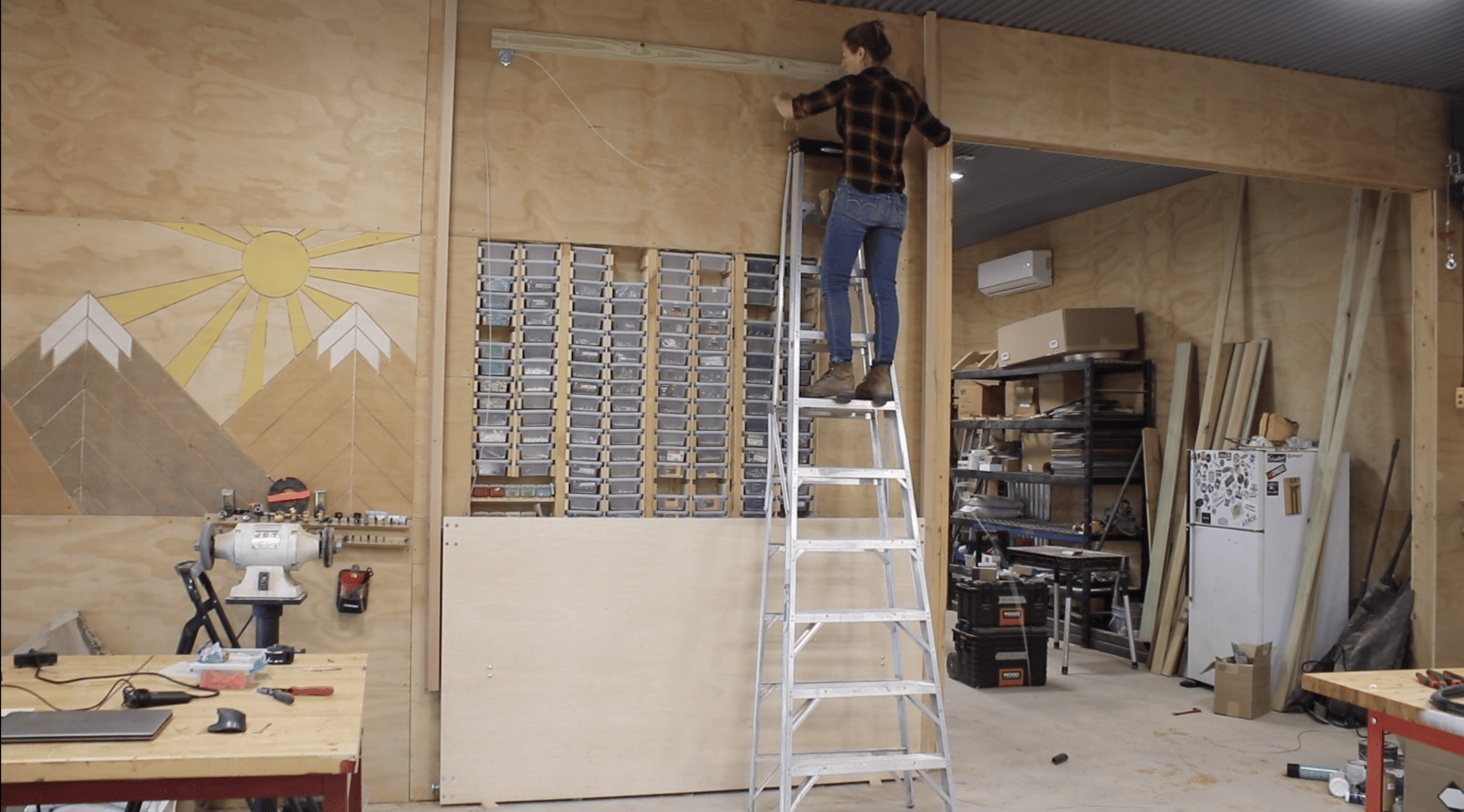 The last component to add is the hoist itself. The mounting bracket is a simple DIY one made from some square tubing I had laying around. The holes are drilled in locations to match the stud location of the wall it will be mounted onto. The hoist is kind of heavy, but nothing unmanageable. I screwed a temporary 2×4 to the wall to give myself a resting shelf to set the hoist onto as I put lags into the studs. 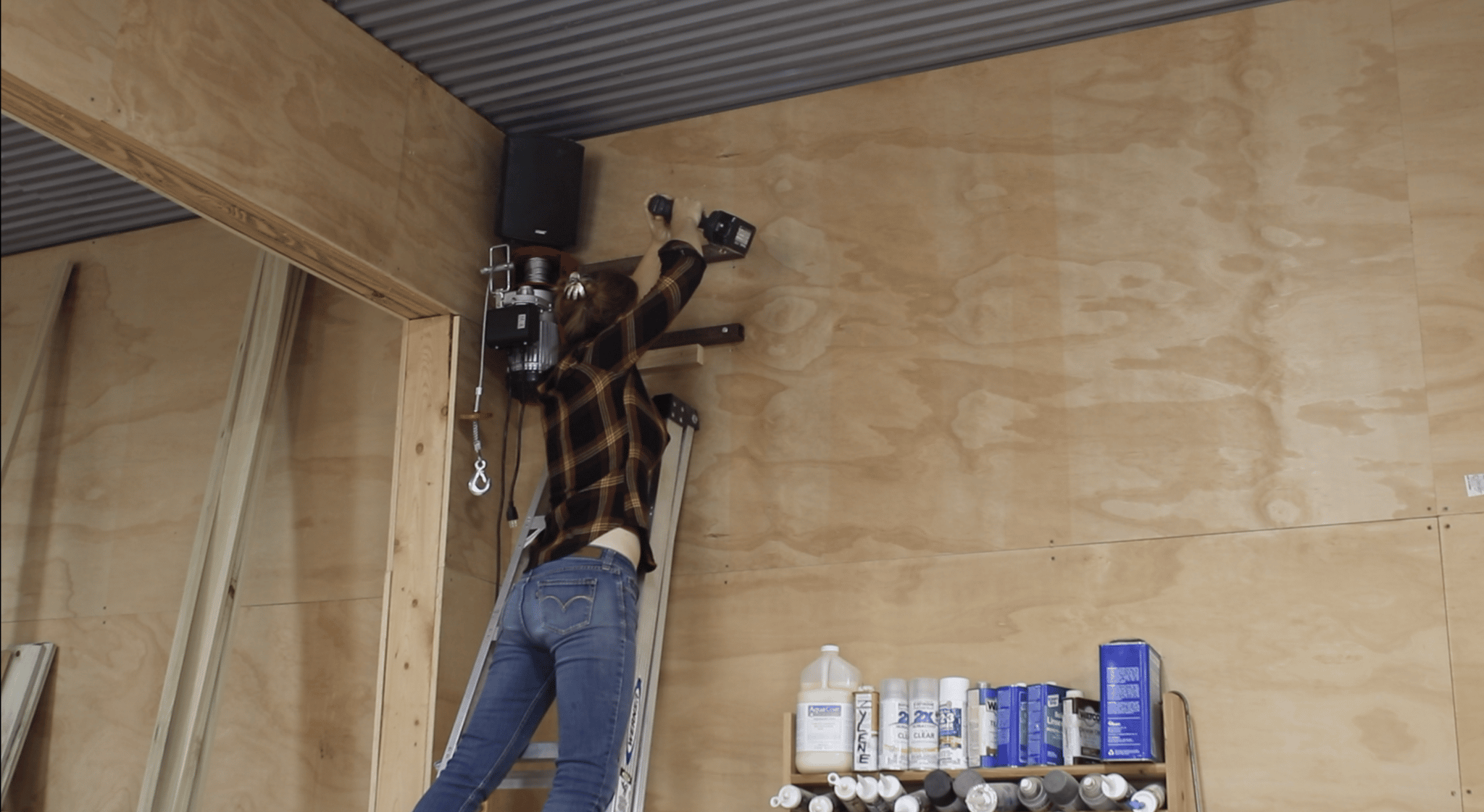 The last step, I added the shelving needed to hold all of the products I wanted to store here. One of the coolest things about this project (I mean, besides the fact that it’s a rising shelf), is that you can customize it to hold just about anything. Just keep on eye on the total weight of the objects that you’re storing – it will need to be below the capacity of the hoist and the components you used. The key things to pay attention include what the hoist is rated at and do all of the components have the same rating. One weak link in a chain will cause it to fail. I built the rising shelf as an ultimate shop storage system to organize spray paint cans, tubes of caulk, paint cans, and paint supplies such as brushes. 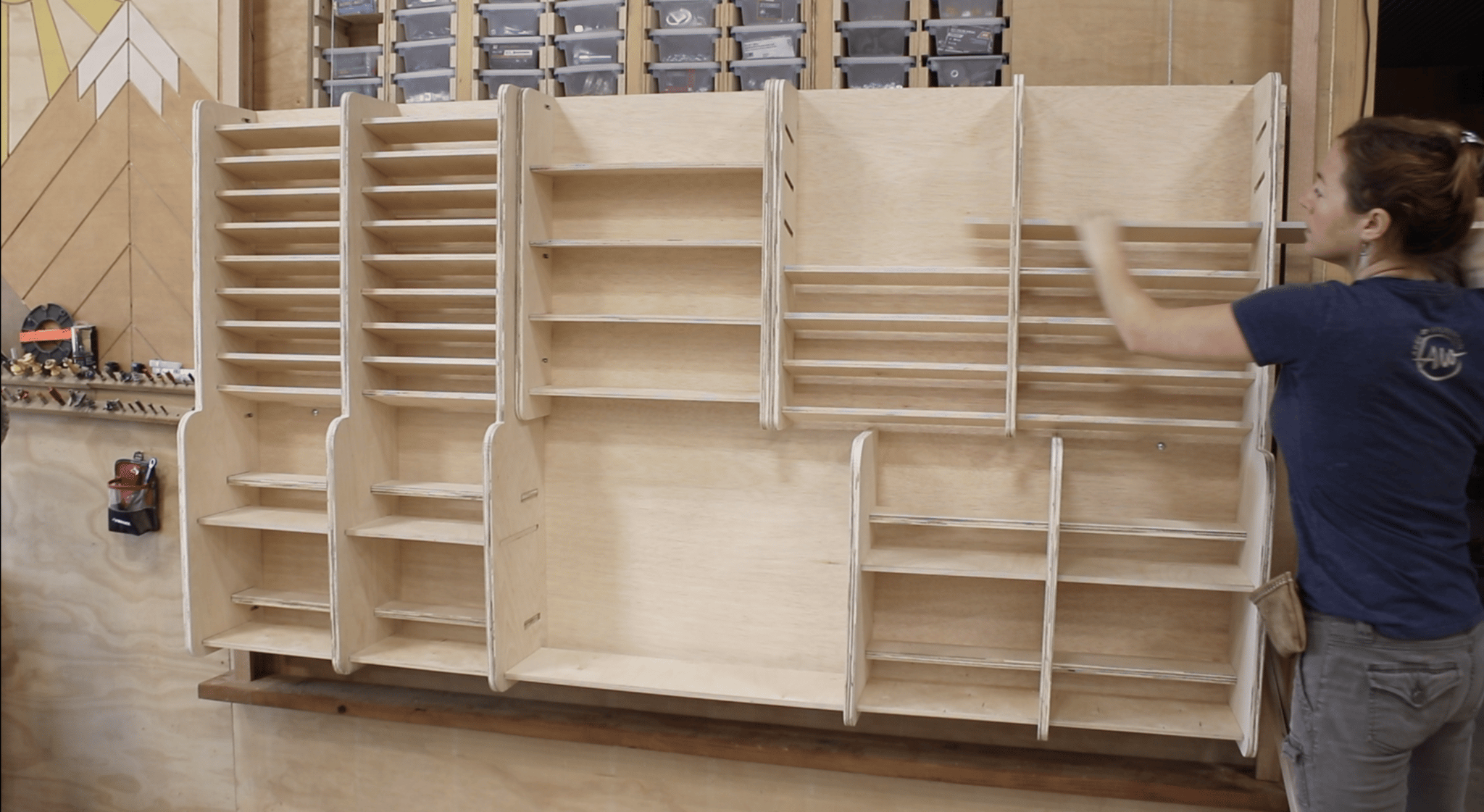 Before I forget, another thing I did was extend the pendent to be over near my shelf instead of up by my hoist. Now, if my shelf is raised when I need to access to my hardware, I can walk right up to the wall and lower it down. Then I can either keep it here or I can raise it back up to store at the top of my wall and keep the hardware rack exposed. Cooooool!

Are you ready for the before and after?! Check it out! 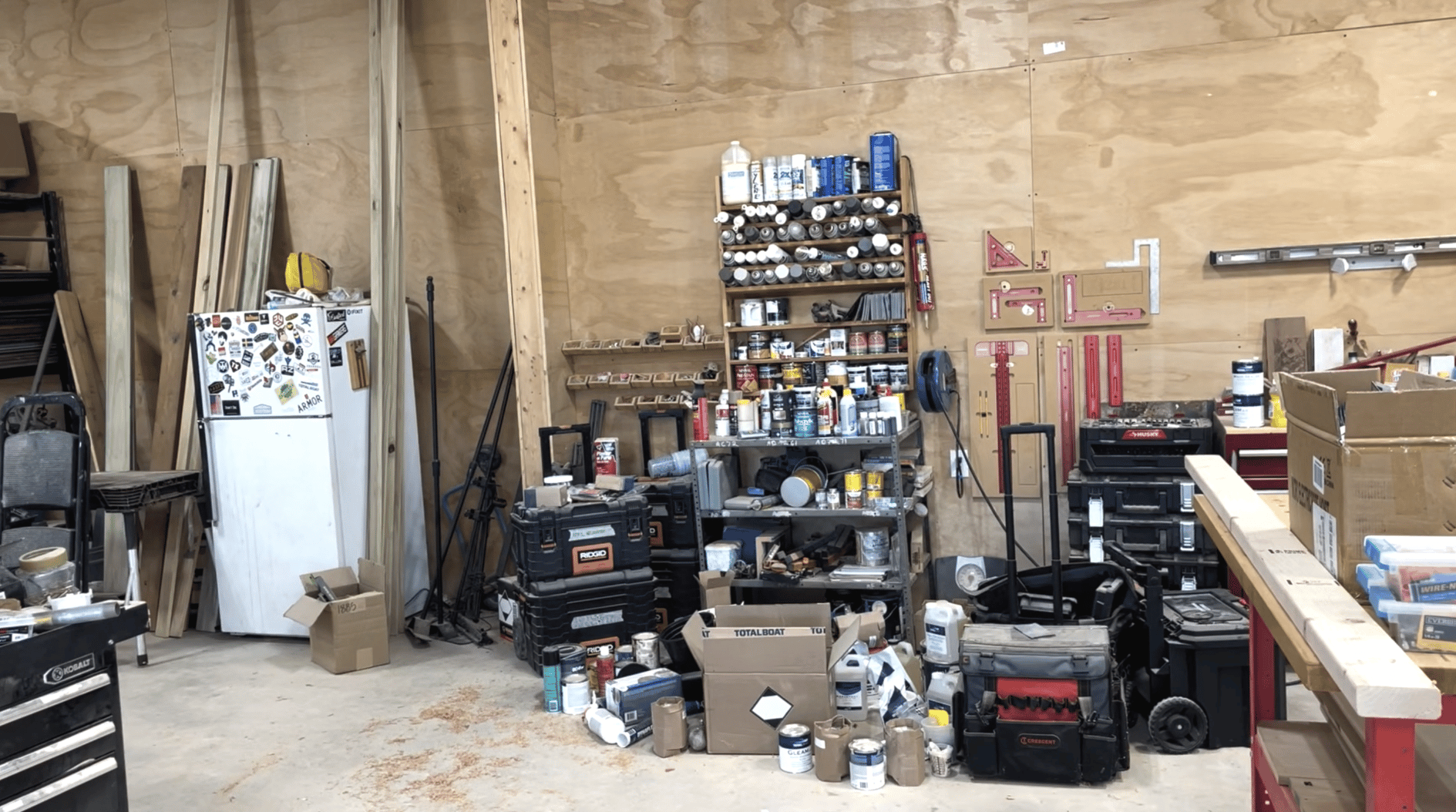 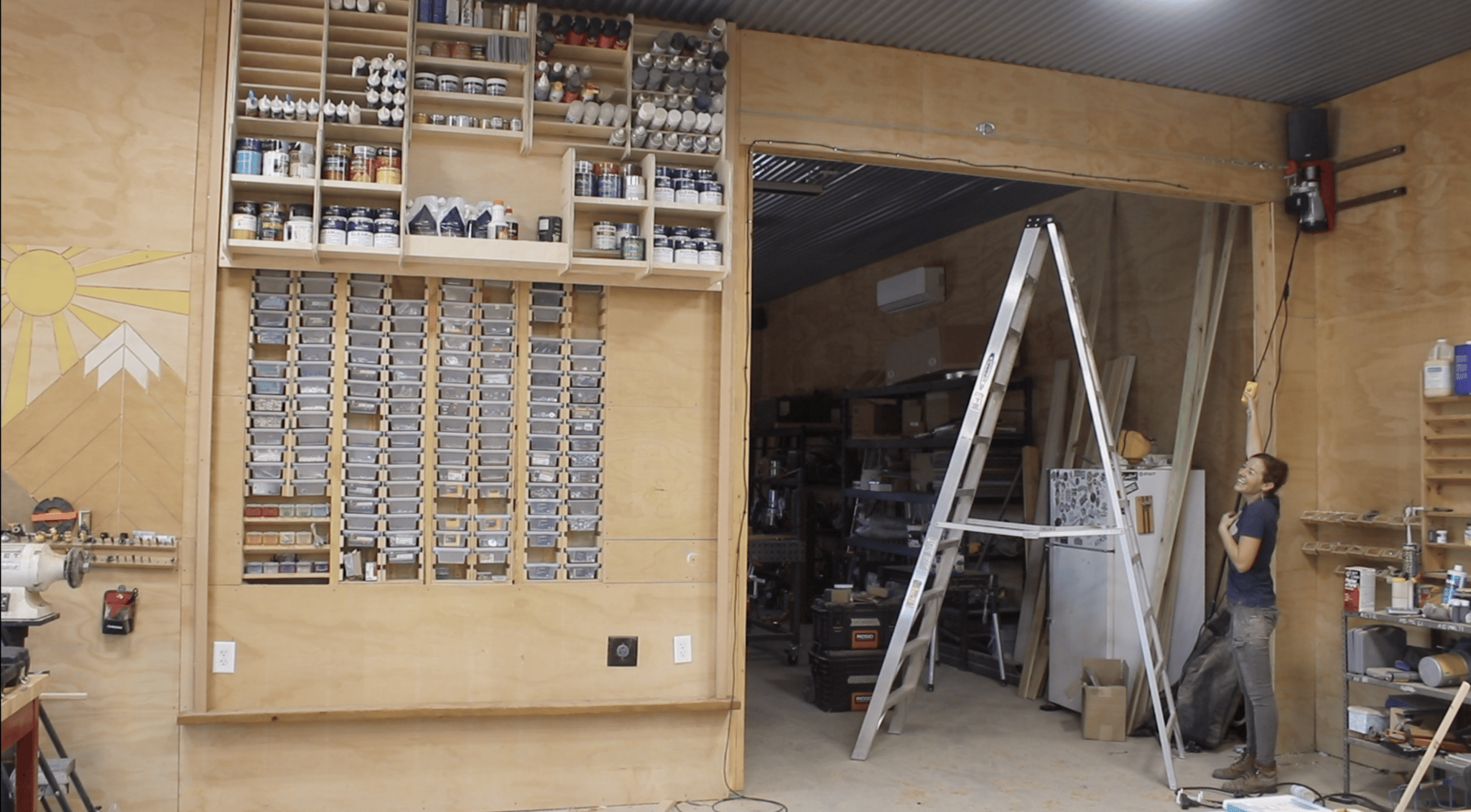 By the way, I have a blog and video on how I made this in-wall hardware rack if you want to do the same.

Don’t forget to check out the Rising Shelf Plans!

Interested in organizing your shop? If so, I have several plans to help you out! See y’all next time! 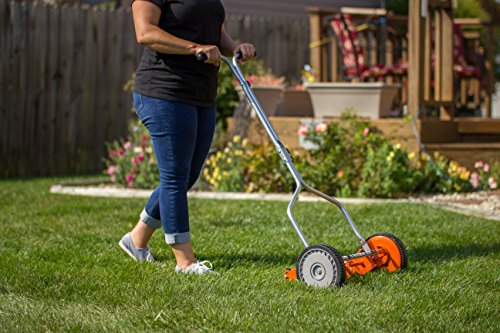 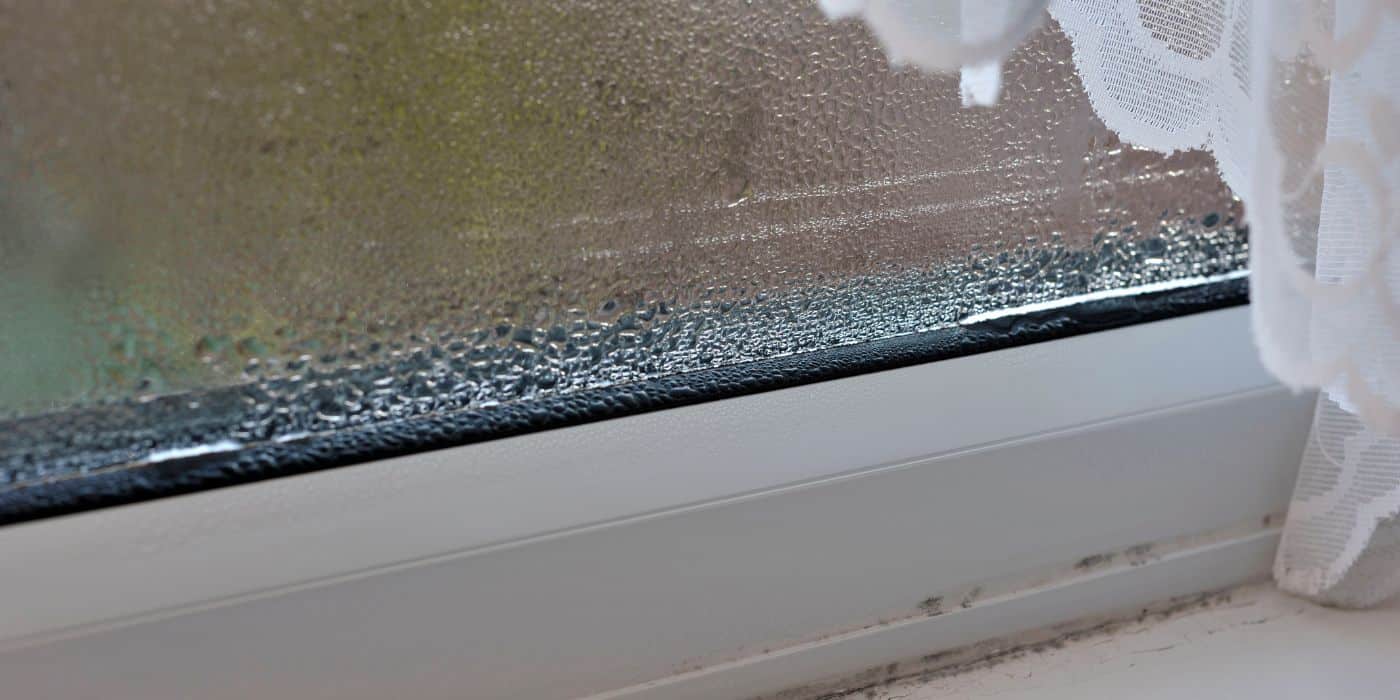 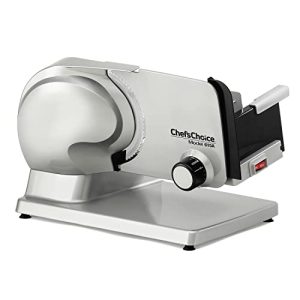 What Should You Know About Air Balancing and Why Is It Important?