If “The Office” was still on today, it would probably look a lot different.

With the global pandemic forcing many offices to have their employees work remotely, the Dunder Mifflin crew would most likely be working from home, too.

In a fun, re-imagined version of the set, online interior design service Modsy came up with what some of the characters’ home offices might look like right now.

Below, see the newly designed spaces for Michael Scott, Dwight Schrute, Jim and Pam Halpert and Kelly Kapoor — and decide who deserves the Dundie Award for best WFH setup.

He may be the boss, but he also wants to be your best friend. That’s why Modsy designed an approachable and casual home office for Michael Scott (played by Steve Carell). Alessandra Wood, Modsy’s vice president of style, said Michael would probably want his office to feel cool, but it wouldn’t be too edgy.

“He loved to combine work and play, so while it’s completely functional, his bookcases would have more ‘fun’ items than work-related supplies,” she explained. And he’d have a hand-shape chair to sit in, which he’d “undoubtedly laugh his head off every time someone used it,” she said.

In keeping with his love for his old farmhouse and Pennsylvania Dutch furniture, Dwight Schrute (played by Rainn Wilson) would most likely have a sturdy, solid wood desk along with wooden accents in his home office.

“He loved the simple things, like a rocking chair, but he would want to resume a position of power, especially in his own home,” Wood said. “That’s why his desk would face out: where the stone fireplace would be behind him, a tiger rug beneath him and he could look out onto his ‘kingdom,’ aka his beet farm, and watch over his Trans Am.”

Sharing a home office might be hard for some married couples, but not Jim and Pam Halpert (played by John Krasinski and Jenna Fischer). The duo would probably want to sit side by side, no doubt working together to play virtual jokes on Dwight.

“Jim and Pam’s home office would be clean and personal as they would have a very family-friendly and inviting home,” Wood said. “This space needs to be reflective of that: practical but still designed and intentional for all its uses as both office and art studio for Pam’s more creative endeavors.”

With a bold and fun personality, Kelly Kapoor (played by Mindy Kaling) would probably have a colorful and bright home office. Always up for a good fashion show at work, “Kelly most likely would be dedicated to style, trends and all things chic and modern,” Wood said. “Her office is the manifestation of those things with a bold rug and chic acrylic desk.”

See more of Modsy’s reimagined TV show sets including “Friends,” “Sex and the City,” and “Seinfeld.” 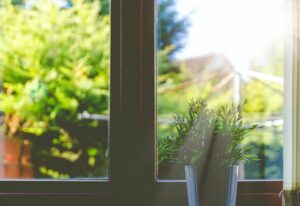 How to Bring More Light into Your Home

Best Time of Year to Remove Moss from Roof

Why Do My LED Mini Christmas Lights Stop Working?

4 Ways to Secure Your Home Against Burglars

Can Double Glazing be Fitted from the Inside?

What You Need to Know About Windows in Static Caravans