Looking back over her life, it could be said that Bridgid Coulter was destined to design.

The artist, entrepreneur and principal of her eponymous residential and commercial boutique design firm in Los Angeles traces her interest in the field to Berkeley, Calif., where she was born and raised. Her parents purchased a home across the street from her maternal grandparents, who left Louisiana to escape the racial and socioeconomic segregation of the South during the Great Migration.

Creativity was abundant in the family. Coulter’s grandfather was a blues singer, her grandmother a quilter “who could have been a master chef,” she says, adding, “There would be a can of string beans and a lightbulb in the refrigerator, and we’d have a gourmet meal.”

The house was an exquisitely detailed 1908 mini-Craftsman that Coulter says was built “with dark mahogany walls, beautiful light fixtures and Batchelder tile around the fireplace.” She thought the aesthetically luxurious setting in a working-class neighborhood was a residential standard until she reached adulthood and discovered tract homes were more the rule of that era and her childhood home was exceptional.

Coulter’s surroundings inspired her to tap into her creative side. She majored in theater at the University of California, Los Angeles (UCLA), and upon graduating, quickly landed acting roles in some of the biggest TV hits of the 1990s, including A Different World, Martin and Family Matters. Within a few years, she appeared in her first movie, the 1997 film Rosewood, a drama based on the true story of an economically self-sufficient Black community in 1920s Florida that was destroyed by a white mob. She met her husband, Don Cheadle, an Oscar-nominated actor and activist, on the Rosewood set. The couple has two adult children.

As their careers began to take flight, they agreed one parent would always remain with their children while the other worked.

During those early years, Coulter says she often passed the time moving the furniture around in their 1,100-square-foot Venice bungalow while Cheadle was away working. One day, upon his return, he asked, “Is there going to be a month when I return home, and this is just how our furniture lives?”

That question, along with requests from friends who admired her aesthetic and flair for design in her own home, led her on a journey of exploration to “figure out what design is,” while asking herself: “How does the space we live in affect how we feel and what we do? Does it inspire us or limit us?”

Coulter returned to UCLA and earned a master’s-level certificate in interior design, graduating with honors. Coulter credits the program, which she says leaned into the study of interior architecture more than interior design, with providing an array of practical experience that enhanced how she thinks about palette, texture, scale and surface in her work. “I’ve always been conscious of space and how it makes me feel, whether it is inspired or hugged or warm,” says Coulter. “For me, space is an experience, and we spend so much time in interior space that I think being mindful of the space (we’re in) is important.”

For example, when Coulter and Cheadle embarked on the journey in the early 2000s to build their forever home — the West Los Angeles residence where they still reside — they were intentional about creating an emotional experience for their family. “We wanted our kids to think anything is possible, so our living room has high ceilings,” says Coulter.

By contrast, she says, the family room is designed as a “dark, huggable cocoon” where they enjoy playing board games and watching television. And the kitchen boasts large windows that beam sunlight into the central gathering spot for meals and cooking. The couple “dreamed and drew” the floor plan and hired an architect to carry out their vision.

Every individual will have a different feeling or interpretation about what home represents, says Coulter. “For some it may be stifling, for others a sanctuary, but it’s undeniable the amount of time we spend in our homes and other interior spaces,” she says.

Coulter says the measure of what constitutes successful interior design isn’t based on the credentials of the designer, but on “whether the home feels warm and feels like that person, and whether they’re happy and love living in that space” and hosting friends there.

Deeply contemplating how human beings “feel, think and move differently through space is what I love applying to interior design,” Coulter says. “Space is my canvas. It’s how I tell a story in 3D.”

It’s insight she attributes to her training as an actress, and an aspect of her practice she believes leads many to seek out her services. “It’s fun for me to try to solve that puzzle of what is it that you want to feel here and how do I tell that story through space, and give you that experience?”

Like asking a mother to pick her favorite child, Coulter says it’s difficult to identify her most-loved design project. Undoubtedly, it’s any that combine elements that are part of her signature style: layered, monochromatic, with textured patterns and an earthy vibe. “Stylistically, my heart starts beating for warm modern,” she explains. “My dream of dreams is a modern take on an African safari set on a mountain looking at the ocean. These are all of my favorite things combined together.”

The same mindfulness with which Coulter approaches her design practice played a role in a business venture she created in 2018. Coulter’s Blackbird House, a co-working space in Culver City, Calif., is geared toward supporting and uplifting professional women of color and their allies.

The expansive former industrial space that Coulter personally designed is described on its website as “a progressive collective that celebrates creativity, promotes wellness, inspires productivity and encourages activism.”

Being purposeful and having a positive effect on the world is a personal tenet and part of Coulter’s business ethos. For example, she stopped using materials containing volatile organic compounds (VOCs) several years before the state of California banned them because it went against her principles. Toxic VOCs emit — or “off-gas” — fumes that emanate from a freshly painted room.

Most clients come to a project envisioning a specific end result, and Coulter works hard to make them happy while educating them about the long-term benefits of spending more on materials of higher quality for an office or home remodel versus a cheaper alternative, noting the cost of installation is typically the same. It’s an easier conversation today than when she started her practice 15 years ago, she says, because consumers are “more open-minded” and knowledgeable about the need to create safe, inhabitable spaces.

“Sustainability can also mean building something that’s passed down through generations,” says Coulter, who also reupholsters durable classic furnishings made during the mid-20th century. “I do not like disposable furniture, which often finds its way to landfills.”

She tries to impart the importance of “upcycling” furniture that remains salvageable and serviceable. For those clients who feel compelled to purchase new furniture or other décor, she recommends items made from recyclable metals, woods and other eco-friendly materials. 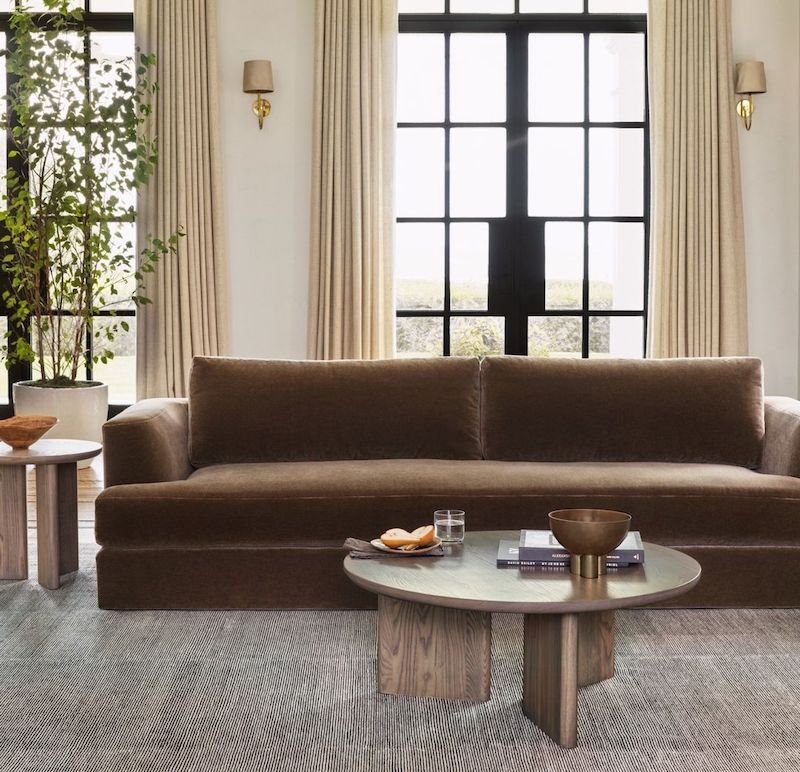 Why Brown Home Decor Is a Top Trend for 2022