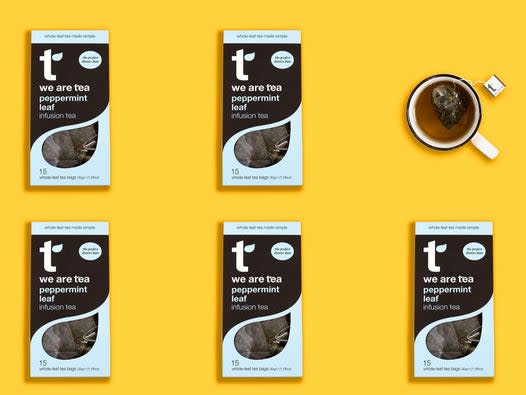 You might think tea bags are just simply paper and tea, and that of course they decompose, and that you’re doing your bit by putting them in your home food waste to compost.

But, you’re wrong – unless you use plastic free tea bags, that is.

In actual fact, many of the tea bags we buy contain polypropylene, which is what the tea bags are sealed with, so when you put in the used bags in your food waste, you’re actually putting toxic chemicals into your beautiful compost that will eventually seep into the ground.

Some plastic free tea brands differ between being biodegradable and compostable, which is important to know about, so you can deal with your used tea bag correctly.

The former means it will be broken down by a biological process, but it needs the right conditions which are most often at an industrial level that uses a higher heat than you can obtain in your garden. And the latter is able to break down in home garden composting conditions and will work as a fertilizer afterwards.

There are lots of brands who champion making tea bags without these tiny plastic pieces, and there’s more that are changing to rid themselves of it too.

But if you’re favourite brand doesn’t offer a plastic free bag of your favourite brew, you can also use loose leaf tea.

We looked for brands that not only used alternative materials to plastic in the actual tea bag, but ones that also removed plastic from the packaging, reduced excess materials and tags, paid producers a fair wage, and of course, tasted excellent.

Here’s our roundup of tea bags that are free of plastic.

You can trust our independent reviews. We may earn commission from some of the retailers, but we never allow this to influence selections, which are formed from real-world testing and expert advice. This revenue helps us to fund journalism across The Independent.

This brand is all about as transparent and sustainable as it comes, and the brand makes it all fun too. Brew Tea – based in Manchester, uses whole leaves (not dust, it insists) and is a member of the Ethical Tea Partnership which supports small estate grower. This is a refreshing brew full of flavour mixing bergamot oil with ceylon black tea, orange peel and calendula petals. All the tea bags from the brand are made from cornstarch, the inner lining is made from Nature-flex and inside the box is a really useful card telling you what all the packing is made from and how it should be recycled: from the council food recycling (tea bags and inner lining) which decomposes at 45 days to the outer box which goes into the paper recycling.

It might look most like an ordinary tea bag, but this is far, far from it. Each teabag is unbleached (hence it’s more earthy colour), organic, fairtrade, plastic free and non GM. It was the world’s first pillow-shaped bag to meet this criteria and was launched in 2018. And if that’s not enough, it was even the world’s first fairtrade tea. The teabag is made from abaca plants – a type of banana – and the plastic that sealed the bag is replaced with a material made from non-GM plants and it’s become our new go-to every day tea. Just like it says. And it’s by far the most affordable on the list. Although Clipper has ticked many boxes with its teabag, it’s now working on making the inner foil packaging recyclable too.

This innovative social enterprise produced the first organic tea in Bangladesh, and created a cirucluar working scheme where local people benefit. Its cow lending scheme means local people who look after the cows are able to get milk, which in turn provides manure for the tea plantation.

Since its beginnings in the late Nineties, Teatulia now employs a whopping 3,500 women who plant, nurture and pick the tea. The women are paid a better wage than other tea businesses and it goes a step further and also provides healthcare and education to the workers and their families, so you can know that enjoying your cup of tea did not mean someone in the supply chain was exploited, as is the case on many plantations.

The black tea is made from camellia sinensis assamica bushes, which have totally regenerated an area that was once scrubland. All of the brand’s tea is pesticide free, and instead of using harsh chemicals, the plantation is surrounded by neem trees, which act as a natural pesticide.

This earl grey blend is made from organic bergamot with a hint of orange peel. It’s very light on the floral notes and is super easy drinking. The pyramids are made from soilon, so are 100 per cent biodegradable, and don’t contain any glue.

We love this brand’s ethos of “cup to compost”, where all the pyramids are made from GM-free sugar startch, which is home compostable, along with the inner plastic-look pouch that holds the tea bags. Hampstead Tea was the first company to produce a fully home compostable bag – which takes 91 days. The tea is whole leaf and all the ingredients are organic or biodynamic, where no chemicals are used. We love that there’s no string or labels on the bags and it comes with a little handy bamboo tong to grab your bag out – perfect when there’s no spoons in the office. The earl grey makes an excellent, well-rounded brew. There’s also four others flavours in the range.

This whole-leaf tea company started in 2007, and was the first brand to remove the paper tags from teabags. In 2012, We Are Tea joined the Ethical Tea Partnership and moved from nylon bags to ones made from soilon. Each teabag is sealed by ultrasound instead of glue, which makes them biodegradable at an industrial level between three and six months, so make sure you put them in your council food waste bin. It can go in your home compost, but it will take much longer (at least 18 months). When the tea first launched, the plastic inner part of the packaging was not recyclable, but it’s now made from Nature-flex, too.

Based in Edinburgh, this ethically sourced tea specialist café, which opened in 2008, sells its own brews in tea bags and loose leaf and is part of the Ethical Tea Partnership. The tea bags are made from soilon, which isn’t bleached and is biodegradable. The tag is made from paper which is not laminated and is attached to the string via ultrasound, while the inner packaging, made from Nature-flex, is recyclable and can be composted at home. The brand is also working on making all its wholesale orders plastic free too. We love this as a weekend morning brew. And definitely go to the cafe when you’re in town.

The teabags at Nemi have always been plastic free, since launching in October 2017. The pyramid bags are made from soilon, are guaranteed GM free and are totally biodegradable at industrial level. There’s no glue used to attach the string and labels, instead it’s joined by ultrasound and all the packaging is made with Natur-flex. What we love most about this that the brand also helps refugees integrate into the UK by employing them to run their tea stalls.

This Australian brand, born in 1996 in Melbourne, reached the UK in 2014 in London’s Shoreditch (and grew to 14 stores in the capital) and takes its sustainability seriously. The bags are made from cornstarch, but have a more opaque appearance than any of the others we tested. The bags will breakdown in home composting but it can take a long as 18-24 months so it’s best to put it into your local council food composting where it will be quicker. The inner plastic is not recyclable, but the brand is working on switching this to a plant based material by 2020. This is our favourite new tea for it’s floral flavour that we love devouring from a pot at the weekends.

After launching in 2017, Roqberry prides itself on championing “blending the rules” by using classic flavours to create modern fusions such as “aromatic sushi and spice” and “black smoke”. These pyramid teabags, made from soilon, encase the single-source tea that comes in black, green, herbal, rooibos and oolong, and all are biodegradable. As it won’t breakdown in under a year, this tea bag should be thrown out with your council food waste as soilon composes at industrial standards (in six to eight weeks). The cube boxes are made from FSC paper that’s easily recyclable, too.

Launched in 2001 in Bristol, Pukka Tea’s bags differ from all others as each bag is wrapped in an individual envelope to ensure freshness – and it’s more environmentally friendly than you might think. It took four years of research to develop this new packaging, and it has removed more than 100 tonnes of plastic from the brand’s supply chain. The envelope contains only a very thin layer of BPA and PVC free plastic, but is still able to be recycled with paper. Since 2014 the brand stopped using a staple to connect the organic string and plastic-free label, and instead uses a little stitch to attach it.

What began life as a mobile tea bar, has now found a permanent cafe in east London. The plastic free range was added in 2017 and is made from the non toxic material soilon (which needs to go in a collected food waste bin). These are the largest bags we tested and aside from Clipper’s pillow shaped bags, are the only one that comes in a flat large square shape, instead of the pyramid. Bags are packaged in a plastic alternative, the plant based material called Vegware which is also compostable, but at industrial levels..

The Twinings pyramid tea bags have always been plastic free since it was launched in October 2014. They are made from maize starch which is treated by an enzyme that allows it to be spun into filaments. The tea bags include loose leaf tea which makes an excellent brew, but each bag has a label attached that’s covered in a thin layer of plastic – so it won’t dissolve if it ends up in your brew, apparently – and will need to be removed before composting. The inner foil wrapper isn’t recyclable, but Twinings is the process of reviewing it’s range to finpukkd alternatives.

Teapigs was the first brand to receive the world’s first plastic-free trust mark, created by the campaign group A Plastic Planet in May 2018. These biodegradable bags are made from cornstarch, while the paper tags use vegetable inks and are, you’ll be glad to read, non-toxic. Don’t be dismayed when you open your box, as even the clear “plastic” inner bag (made from natureflex) is compostable. The bags can go in your home food recycling bin for compost, which may feel strange, but they will compost.

We think Clipper’s every day tea ticks many boxes and is the best choice for an every day tea thanks for its affordable price. While Brew Tea is great for a weekend brew, and we love its approach to making recycling and saving the planet fun. We also like We Are Tea for removing the label and string.

12 best recipe boxes that deliver meal inspiration to your door

Oktoberfest looks different this year, but you can still celebrate at home with these recipes